The construction of our reduced model: our partners’ valuable assistance during the pandemic

How do you build a prototype when the world has stopped turning and everyone has to stay at home? As the first confinement measures were being announced in March of 2020, nobody at SP80 really had an answer to this question. Yet, by dint of the motivation expressed by implicated students and engineers, as well as the infallible support shown to us by our partners, we are proud to announce that the reduced model has been launched and has been undergoing optimization tests for several weeks. Let’s report back on these last crucial months for SP80! 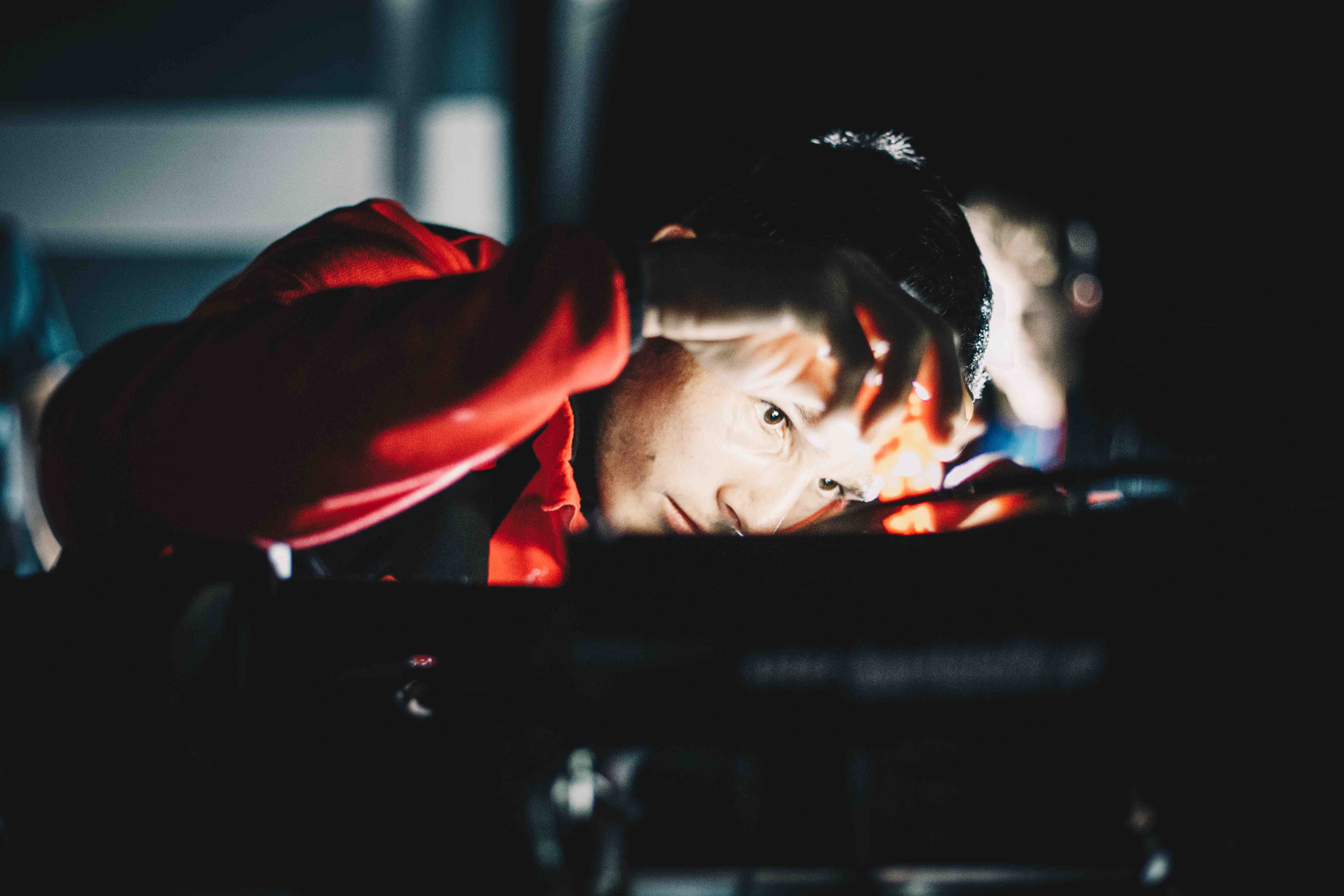 The confinement / A necessary reorganisation

Last March, just as the prototyping team welcomes new members at the start of the semester, the sanitary crisis forces EPFL to close down its facilities. As a result, construction on the reduced model is halted.

At SP80, perplexion and incredulity are soon replaced by the need to adapt and overcome: “It was imperative that we review the initial planning, as it was based on developing parts while others were being machined, which was no longer viable. We no longer had access to the workshops, so we focused on finishing up the design and preparing the construction protocols by discussing via videoconferences. We needed to be ready to kick things off as soon as conditions permitted to minimize the delay caused”, explains Romain, the engineer responsible for the prototype’s realization.

Work from home is rapidly established, thanks notably to our partnership with Dassault Systems via 3DS Academy. Blaise Ribon, a 3rd year student in mechanical engineering attests: “Access to 3DExperience licenses allowed us to tweak the final details while co-working from a distance. Without these licenses, the work would have undoubtedly required way more time and energy.”

A slow but worthwhile engagement

Meanwhile, the team keeps looking for a suitable workshop that also abides to sanitary regulation. The INARTIS Foundation proposes an ideal solution by providing an office near EPFL.

Several weeks later, as confinement measures mellow, some EPFL collaborators are allowed access to campus. The LPAC laboratory and the SKIL fablab become crucial in operations by producing the parts that students conceived months before. 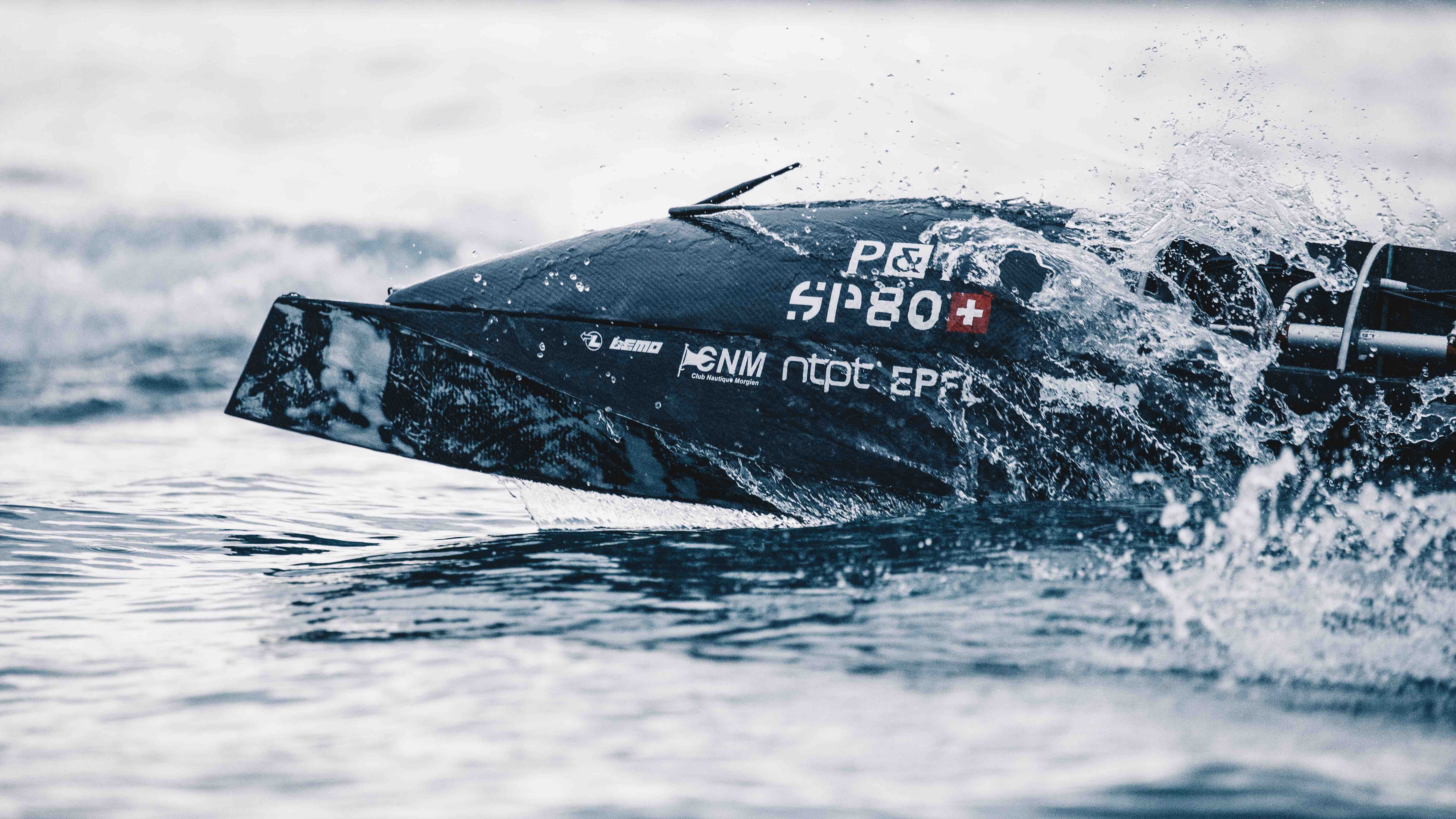 In June, the rhythm picks up, new parts are produced every 3 days, thanks in particular to the responsiveness of Swiss Composites. Océane Suchel, a 3rd year student in mechanical engineering, recalls this demanding period: “What a relief to finally see some real progress being made on the prototype! Two months of confinement definitely pent up a lot of energy and we all shared a hunger to get our hands on deck. It was the chance to discover the practical side of mechanics and to enrich our technical know-how. Working with carbon fiber from NTPT in particular was something I had never touched on before.” A rudder, a foil, then two floaters: the reduced model takes form as the weeks go by.

The team in charge of electronic systems also gets to work: “It is primordial that we collect data during testing to understand the prototype’s, and ergo the real boat’s, behavior.” Explains Benjamin Bonnal, the engineer in charge of electronic systems. “The different sensors are linked thanks to waterproof LEMO cables. We carefully planned our cable routes in advance, to benefit from simple circuits that only required a few hours of calibration beforehand to become functional!”

The reward: launching the prototype

In the end, it only took four months after the start of confinement for the prototype to launch at the Club Nautique Morgien (CNM), our technical partner for the tests. A memorable day for the whole team who remembers their first doubts when confronted with the situation brought forth by the pandemic: “This launch represents several months of hard work coming to fruition. Everybody was so exceedingly proud of contributing to the realization of this prototype that we let our high spirits take over as it tacked for the first time,” remembers Tanguy Desjardin, a student of mechanical engineering. The challenge was a fearsome one and the team did not back down from it, proof of its motivation, passion and cohesion. But this wouldn’t have been possible without our partners who continued to believe in the project despite the most difficult times. It is certain that we emerge stronger from this adventure and geared towards the next steps which will lead us to beat the World Sailing Speed Record in 2022.